‘Salvation Army Day at the Capitol’ arrives in St. Paul

Dozens of Salvation Army officers from all over Minnesota visited the State Capitol in St. Paul on March 11 for one-on-one meetings with about 80 of the state’s 201 legislators. (See photos.) 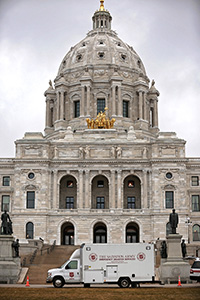 The event, dubbed “Salvation Army Day at the Capitol,” allowed the officers to hold intimate talks with lawmakers and explain how vital The Salvation Army and its supporters are to Minnesota communities.

“Salvation Army Day at the Capitol gave our officers a chance to educate Minnesota’s senators and house reps about the positive impact that our life-changing programs make on individuals and communities throughout the state,” said Lt. Col. Lonneal Richardson, leader of The Salvation Army Northern Division. “We are grateful for the time these legislators gave us to tell our important story.”

The officers focused their meetings on three main topics:

Housing: The Salvation Army Northern Division and its supporters are working hard to end Minnesota’s housing crisis. We operate dozens of housing facilities that offer safety and stability for hundreds of people and families every night. Together these facilities provide 580 emergency shelter beds; 210 units of transitional housing; and 350 units of permanent housing. (Read success story.)

Family mentoring: Recent data shows that more than 500,000 Minnesotans – including 150,000 children under the age of 18 – live in poverty. A Salvation Army family mentoring program called Pathway of Hope is helping to reverse this trend by giving low-income families tools to overcome their biggest barriers to success. (Read success story.) 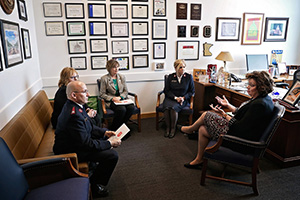 The Muellers focused much of their discussions on the issues of housing and homelessness.

The Rochester Salvation Army is one of its community’s foremost thought leaders on housing and homelessness, proving these and other important services:

“We’re doing all we can to serve our city’s homeless population and to stop homelessness before it starts,” Major Lisa said.

The Rochester Salvation Army is one of 20 Salvation Army Worship and Service Centers making a positive impact on thousands of people in cities throughout Minnesota. 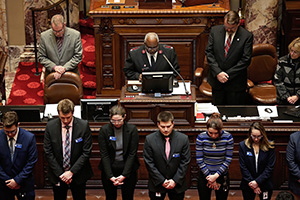 The Salvation Army was also on display inside the chambers of the Senate and House of Representatives, where opening prayers were delivered by Lt. Col. Richardson (pictured) and Major Nancy Mead, Women’s Ministry Secretary, respectively.

This is the second year in a row that The Salvation Army has held a Day at the Capitol event in Minnesota.

Day at the Capitol events are held regularly by charities, businesses, colleges, and other organizations.

The Salvation Army Northern Division pledges to do the most good with your gifts of time and money, with 81 cents of every dollar going directly to services. Join us by volunteering or giving a donation to support your local community.