Imagine how hard your life would be if you were a single parent, raising a child who is 58 years younger than you. 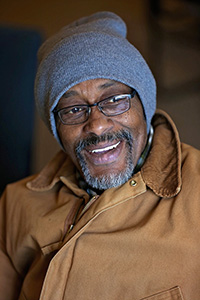 Welcome to the world of Larry (pictured), a 61-year-old man raising a 3-year-old boy.

Larry and his son live in Fergus Falls, Minn. His son's mother walked out on them early last year.

“Ever since then, it’s all been on me,” Larry said.

Larry is disabled and illiterate, making his complicated circumstances even more difficult.

Thankfully, Larry has had The Salvation Army on his side to help him along.

“If it weren’t for The Salvation Army, I don’t know where I’d be,” Larry said.

Larry first met The Salvation Army after his son's mother disappeared, when a Child Protection Services officer suggested that he enroll in a Salvation Army mentoring program called Pathway of Hope. 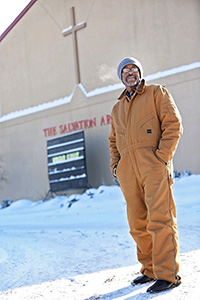 Pathway of Hope gives at-risk families tools to overcome their biggest barriers to success. Each family meets with a Salvation Army caseworker once a week to set goals and form a plan to achieve them. Every goal that’s accomplished moves the family one step closer to a brighter future.

“Pathway of Hope connects people to resources that can be overwhelming to navigate alone,” said Lt. Elysia Nordan, leader of the Fergus Falls Salvation Army. “This program gets a community of support around people and helps them make lasting change.”

Through Pathway of Hope, Larry has achieved several big goals that would have been much more difficult for him to accomplish alone.

Larry’s first goal was to find better housing. When he first joined Pathway of Hope, he and his son were living in a tiny one-bedroom apartment. Larry couldn’t afford anything bigger; he lives on a fixed income, receiving a modest social security check every month. 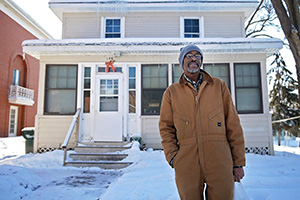 Larry’s Pathway of Hope caseworker, Breanna Grundmeier, helped him apply for a housing assistance program. He qualified and was able to move into a two-bedroom apartment (pictured) in June.

“Going from the little apartment to the two-bedroom apartment is when we saw the biggest change in Larry,” Grundmeier said. “The positivity and the hope he’s shown has been astonishing.”

Another big goal: Obtain legal custody of his son. Throughout 2019, Grundmeier helped Larry navigate his court hearings and obtain important documents such as a birth certificate and social security papers. She also helped him get his son enrolled in education services.

“Ms. Breanna was with me through thick and thin,” said Larry, who obtained sole legal custody of his son in November 2019. “She stuck by me. Everybody at The Salvation Army stuck by me.”

Larry’s next big goal is to obtain the legal right to spend more time with his 4-year-old stepdaughter, whose mother is that of his son's. The little girl had lived with Larry and his son for several months last spring before being placed into foster care. Currently, Larry and his son are allowed to visit her once a week for two hours, under supervision.

“My son misses his sister – she’s the only friend he ever had,” Larry said.

Although Larry is sad that he can no longer see his stepdaughter every day, he remains thankful that her needs are being met and that she is living in a safe home. 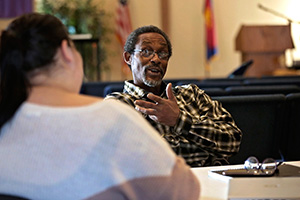 “From the very beginning, Larry has only cared about the kids – nothing has been about him,” Grundmeier said. “Everything with Larry is kids, kids, kids.”

Larry is also using Pathway of Hope to improve his relationship with God. The program offers spiritual guidance to any family that requests it.

Larry is thankful for the help he has received from The Salvation Army. He is proud of how far he has come, and excited about how much farther he is sure to go.

“I’m moving forward,” Larry said. “I want a better life for these kids. I don’t need anything more than that.”

About Pathway of Hope

Founded in 2012, Pathway of Hope has improved the lives of thousands of families at Salvation Army locations nationwide.

The goal of Pathway of Hope is to end generational poverty by empowering families to overcome barriers like unemployment, unstable housing, and lack of education. The program marks a pivotal shift from treating the symptoms of poverty to preventing the epidemic at its root.

There are no income requirements to join Pathway of Hope, and the program is free. The only requirement is that participating families must have at least one child under the age of 18.

By targeting families with children, the impact of Pathway of Hope is doubled because it allows two generations to be touched by one program.

“There will always be a need for emergency assistance, but programs like Pathway of Hope are what make real change,” said Lt. Nordan, whose office has about a dozen Fergus Falls families enrolled in the program.

Pathway of Hope is offered at Salvation Army locations throughout Minnesota, North Dakota and nationwide.

Watch Larry explain how The Salvation Army helped him, with additional commentary from caseworker Breanna Grundmeier and Lt. Elysia Nordan.

The Salvation Army Northern Division pledges to do the most good with your gifts of time and money, with 81 cents of every dollar going directly to services. Join us by volunteering or making a donation to support your local community.