Bob Domaille stops by The Salvation Army in Rochester, Minn., once a year to drop off a sizable donation. He’s been doing so for as long as he can remember. 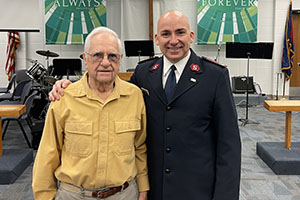 Like clockwork, the 92-year-old gave his perennial gift a few weeks ago. But this time, he became emotional.

“He left the building in tears for what The Salvation Army did for his family many years ago,” said Major Bob Mueller, leader of the Rochester Salvation Army.

Domaille gives his annual donation to thank the Rochester Salvation Army for helping his family during the Great Depression.

He grew up in Rochester with his dad and five siblings. Their mother died when he was just 3 years old.

“I can still remember her face as I looked into her casket,” said Domaille, who was born on the day the Great Depression began: Oct. 29, 1929, better known as Black Tuesday.

After his mom died, The Salvation Army stepped in to help.

“The Salvation Army was very good to us,” Domaille recalled.

Back then, life was not easy for Domaille and his family. His dad worked as a janitor and earned only $105 per month. In order to get enough food to eat, his family planted onions and potatoes in their front yard and raised chickens.

“Many people knocked on our door asking for a handout, and if we were eating, they were invited in to share our meals,” Domaille said. “We shared our belongings with people who were worse off than we were.”

Domaille and his family got through the Great Depression by working hard, giving what they could, and maintaining a strong faith. They attended church at the Rochester Salvation Army every Sunday.

“Each Sunday after church, we would go to the cemetery to see my mother’s grave and pray,” Domaille said.

Domaille went on to live a successful life in Rochester. He and his wife, Barbara, were married in 1948 by a well-known Salvation Army officer and author named Brigadier Edward Deratany. The couple has four kids and is still happily together after nearly 74 years.

“God has been very good to us,” said Domaille, who spent many years owning a local car dealership. “He blessed our family and we thank Him for all He has given.”

Domaille also gives a generous gift every Christmas season during the annual Mayo Clinic Match, when the hospital matches donations given to the Rochester Salvation Army.

“Bob Domaille’s lifetime of faithful giving to The Salvation Army demonstrates the eternal value of Doing the Most Good in this world,” said Major Bob Mueller. “We should never underestimate the huge impact that small acts of service and kindness can have on others.”

Please join The Salvation Army by giving a donation or signing up to volunteer. With your help, we can show families in need that there is love beyond their most difficult hardships.