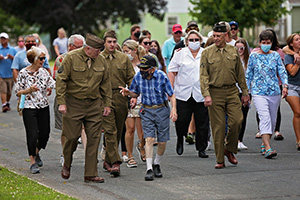 Mickey Nelson of Clarks Grove, Minn. became a nationwide phenomenon when his “Walking to 100” fundraiser for The Salvation Army started in early June. Since then, the spry 100-year-old World War II veteran has been walking every day to reach his goal of walking 100 miles before the end of summer. Donate now.

Nelson accomplished his mission Aug. 5, surrounded by friends and family who joined him during his final mile-long walk through the streets of Clarks Grove. (View photos.)

“This was for a good cause,” Nelson said, moments after crossing the finish line (pictured). “I’m so glad for the people who contributed to this.”

Nelson’s family is proud of his accomplishment.

“This is the day we’ve been waiting for,” said Nelson’s daughter, Michelle Kelm. “This turned out so much more spectacularly than we could have hoped. The Salvation Army has been a great organization to work with.”

Nelson originally set out to raise $5,000 for The Salvation Army. His fundraiser went on to raise an astounding $106,000 for our COVID-19 relief efforts, which continue to provide food and basic care for thousands of Minnesota families affected by the pandemic.

Nelson’s story has been covered by news outlets across the country and world, including Good Morning America, CNN, People Magazine, Access Hollywood, and more.

“We thank Mickey for his heroic efforts to raise money for people in need,” said Lt. Col. Dan Jennings, leader of The Salvation Army Northern Division. “The example he has set is an inspiration to thousands of people. We thank God for this man.”