January is National Human Trafficking Prevention Month – a national effort to raise awareness about human trafficking and educate others about how to identify and prevent it. 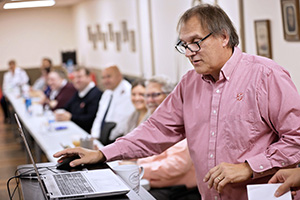 “To prevent human trafficking, communities must be made aware that this evil exists and be educated about what puts children, teens, and adults at risk in their cities,” Terry Hildebrandt (pictured), Social Services Director for The Salvation Army Northern Division.

In early 2021, Hildebrandt helped form an Anti-Human Trafficking Committee to expand The Salvation Army Northern Division’s reach and impact. The committee includes nine Salvation Army officers and staff members from our locations and offices throughout Minnesota and North Dakota.

The committee and other Salvation Army staff members and volunteers are working hard to raise awareness, including: 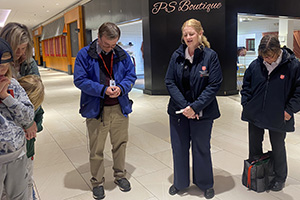 Partnering: We partner with other anti-human trafficking agencies to educate the public. In November, for example, Fierce Freedom hosted a two-hour education and awareness training at Salvation Army headquarters in Roseville, attended by dozens of local community members, staff and volunteers. Also that month, Salvation Army staff and volunteers partnered with Stories Foundation to distribute cards and stickers to shoppers at Rosedale Mall. (Pictured: Salvation Army Envoy Kristy Anderson leads a prayer before the team blankets the mall.)

Distribute information: We hand out anti-human trafficking information at at our operation centers – such as this pocket guide offered at the Duluth Salvation Army – that include tips on how to identify human trafficking, how to get help, and other resources.

“The Salvation Army is positioned to make an impact,” Hildebrandt said. “We continue to explore where our current talents and resources can help create solutions that do not yet exist.”

The Salvation Army fights human trafficking around the world, with staff and volunteers serving in more than 130 countries. Our international position statement reads:

The Salvation Army is deeply committed to fighting modern slavery and human trafficking for sex, labor or organs, exploitative labor practices, child labor, and early and forced marriage. It involves not just individuals but also social and economic systems. 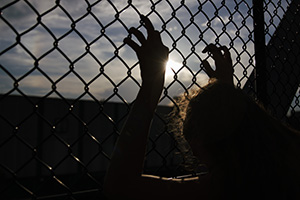 Get help. If you are the victim of human trafficking or know someone who is, called the National Human Trafficking Hotline toll-free at 1-888-373-7888. Advocates are available 24/7.

Books. God’s teardrop: My journey from Healing and Addiction and Prostitution, by Dellenna Harper and Jane Sutter Brandt. In Pursuit of Love: One Woman’s Journey from Trafficked to Triumphant, by Rebecca Carter.

Please join The Salvation Army by giving a donation or signing up to volunteer. With your help, we can show families in need that there is love beyond their most difficult hardships.