Everyday people, nonprofits and small businesses from across the Twin Cities are rising up to help The Salvation Army collect 2 million pounds of food in March.

Grassroots food drives have been popping up all over the metro area, including local churches, fire departments, real estate offices, fitness centers, and elsewhere.

“We want to be a part of this food drive because of what’s going on with food insecurity in this state,” said Jeri Gorman of the St. Paul Optimists Club, a 96-year-old organization that promotes positive activities for local youth. She launched a food drive that is running now until March 19, after which she will deliver the food to The Salvation Army.

“Hosting a food drive is easy, it doesn’t cost anything, and it helps people," Gorman said. “We are excited to be a part of this.” 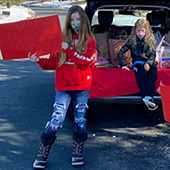 Neighborhood food drives are becoming popular as well. On Saturday, Medina resident Karri Theis and her two daughters collected food donations in the trunk of their car, after posting about the drive on their neighborhood’s Facebook page. To encourage more donations, Theis’ oldest daughter made and handed out bracelets that displayed the word “Give.” In 90 minutes, the family collected nearly 110 pounds of food from their neighbors.

“It was the easiest thing in the world to do,” Theis said. “I’m trying to teach my girls to do these kinds of things because it has a huge impact. It doesn’t take much to help others.” 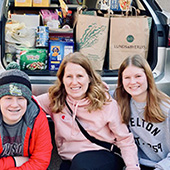 Minneapolis resident Jennifer Kunze and her kids also held a neighborhood food drive over the weekend, collecting donations in their townhome community. They advertised the collection by distributing flyers to 60 nearby households. Kunze said that she and her children enjoyed their food drive because it gave them the opportunity to help people while connecting with neighbors they hadn’t met before.

“There were many positive outcomes,” Kunze said. “We are grateful for an opportunity to help. My family has maintained their jobs and health this last year and we know that we are fortunate.”

It’s not too late for you or your organization to host a food drive of your own. The Salvation Army’s “2 Million Pounds” food drive ends March 26, with a special drive-thru weigh-in event on Saturday, March 27 at Salvation Army headquarters in Roseville. Download a food drive toolkit now.

The Salvation Army operates nine food shelves in the Twin Cities and has provided nearly 3 million meals locally during the past year. An infusion of 2 million pounds of food – equal to about 50 semi-loads – would provide 1.2 million meals, ensuring that struggling families can keep food on the table during the pandemic.

Host a food drive: Collect nonperishable foods at your organization now through March 27. We will send you a Food Drive Starter Kit that includes promotional materials for you to print off or post on your website and social media. When you’ve finished your collection, bring your food to Salvation Army headquarters in Roseville on Saturday, March 27 for a special contactless, drive-thru weigh-in event. Sign up today at 2MillionPounds.org.

Give a cash donation: Help us feed hungry families by giving online at 2MillionPounds.org. Every $150 you give equals about 120 pounds of food.

Watch the video below for an inside look at what a typical day is like distributing food at the West 7th Salvation Army in St. Paul, one of nine food shelves operated by the Twin Cities Salvation Army.

It takes an Army of community support to raise 2 million pounds of food – including help from the Twin Cities media. Below is a small sampling of the many local newspapers and TV stations that are helping The Salvation Army get the word out about this historic food drive.

• Star Tribune story about the growing need for food in Minnesota.

• WCCO Channel 4 story about the need for donations.