Your donations to The Salvation Army’s March Food Drive help Minnesotans like Deb. 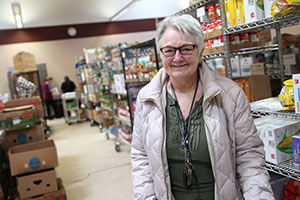 Deb, 67, was forced into retirement five years ago due to health issues. She lives with a mild form of Parkinson’s disease, and seven discs in her back are damaged.

Deb spent most of her life working as a nurse and in the railroad industry. Today, her only source of income is social security.

“My monthly income is one-fourth of what it used to be,” said Deb, who lives in an apartment complex for retirees. “It’s not always enough to cover my bills.”

In August, Deb discovered one of The Salvation Army’s food pantries in St. Paul. She was overjoyed.

“Before that, I was hardly eating at all,” said Deb, adding that she used to eat almost nothing but instant mashed potatoes.

She now stops by the food pantry regularly to pick up milk, bread, meat, and produce.

Her favorite meat is fish.

“I broil it and make a salsa for it,” Deb said. “I’m eating a lot better than I would otherwise. I’m really thankful.”

She pays it forward by bringing extra food to other residents of her building.

“My girlfriend and I bring boxes of food to people who can’t come here – they were starving,” Deb said. “We’ve told a lot of other people about this food shelf, and now they come.”

The Salvation Army operates 22 food shelves and 13 hot meals programs in Minnesota, providing nutritious food for tens of thousands of people like Deb.

Our March food drive aims to raise 2 million pounds of food, which is equal to about 1.2 million meals. That’s about 25 percent of the meals The Salvation Army Northern Division distributes annually.

Deb appreciates The Salvation Army and all of our supporters.

“It’s nice that they back you,” she said. “If you’re hungry, they feed you. They’re super.” 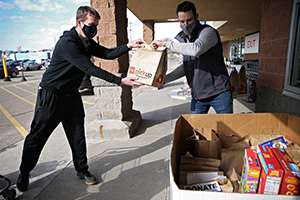 (High-demand foods include pasta, rice, and peanut butter, plus canned items such as fruit, veggies, and soup.)

Host a food drive: Collect nonperishable foods from friends, neighbors, coworkers, church members, and others. We will send you a Food Drive Starter Kit that includes tips and promotional materials for your website or social media. 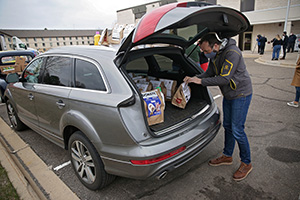 When you’ve finished your collection, bring your food to The Salvation Army’s headquarters in Roseville on Saturday, April 2 for a special drive-thru weigh-in event. (Read about successful grassroots food drives from last year’s collection.)

Buy a Star Tribune newspaper on Sunday, March 20: Inside the newspaper you’ll find a brown paper bag. Fill the bag with nonperishable foods and bring it to a participating Cub grocery store. See a map of all drop-off locations.

Give a cash donation: Help us feed hungry families by donating online at 2millionpounds.org. A gift of just $50 feeds 69 people for a day.