Donations in Action: A moving experience 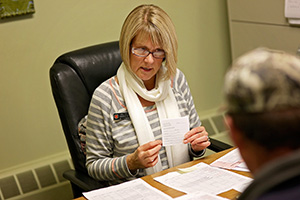 Many of the people The Salvation Army serves are in the middle of crazy, unpredictable circumstances. Their stories can be heartbreaking, uplifting, and everything in between.

Here are some of their stories, submitted by Salvation Army social workers and caseworkers from across Minnesota and North Dakota. Out of respect for the people involved, we are retelling the stories without using names.

If you have ever wondered how The Salvation Army uses your donations, here are some good examples:

This month we gave vouchers for used furniture to a formerly homeless woman who’d secured her own apartment. But there was a problem: The woman had no way to move the furniture to her home.

It was clear that the woman had endured a great deal of trauma and felt very alone. She’d been living in a shelter for a long while, and recently one of her legs had been amputated.

Thankfully, we were able to secure $180 to cover the moving expense. The woman cried tears of gratitude. She and one of our caseworkers prayed together and asked that God would make her new apartment a peaceful and comfortable “forever” home.

On the road again

A man stopped by one of our offices and said he had been on the road for months, walking from one city to the next. He said he did not have a final destination in mind; he just wanted to keep walking and walking.

On this day, the man had walked by our Salvation Army building and wondered if he could get any help inside. One of our caseworkers offered him a shower, which he gladly accepted. Then she gave him some food from our food shelf.

Finally, the caseworker asked the man if he needed any spiritual guidance. The man said yes, then met with one of our officers to pray.

We watched the man walk out of our building, unaware of where he was headed next. We will probably never see the man again, but we are thankful we could help him during our brief time together. And we are hopeful that he will remember the kindness we showed him and pass it along to others during his journey.

A single mom called us in need of a gas voucher to get to and from her new job. When she came to our office to pick up the voucher, she and our caseworker got to chatting about the mother’s terrible living situation. The mother said she often heard gunshots outside her building, there were mice running everywhere in her home, and her bathroom ceiling was caving in. It was not a safe place to raise her kids.

The caseworker gave the mother some “For Rent” phone numbers. He’d written the numbers down several days before, on the off chance that someone would come in looking for an apartment lead.

The next day, the mother called all the numbers on the list. One of the homes turned out to be perfect; it was located in a much better neighborhood and cost $200 less per month.

Within weeks, the mother’s life had taken a dramatic change for the better. She had a new job and new, safer home. She and her kids could not have been happier.

A single mother of three little kids came to us for help after fleeing a domestic abuse situation in another state. The family was vulnerable and did not have any kind of support system in place. Our caseworker suggested that the mother enroll in a Salvation Army family mentoring program called Pathway of Hope, and the mother agreed.

The mother was quiet and reserved, and not good at speaking up for herself. Our caseworker began working with her to build her advocacy skills. Over the course of several weeks, the woman gained confidence and a clear vision about what she wanted her future to look like.

During the next few months, the mother got a part-time job as a home healthcare assistant and she enrolled in a training program to become a Certified Nursing Assistant.

Although this mother is not yet self-sufficient, she is well on her way to becoming so. She has showed improvement in her social skills, while her career and educational goals are close to being realized.

Our caseworker will continue to support this mother until she reaches the finish line.

The Salvation Army Northern Division pledges to do the most good with your gifts of time and money, with 81 cents of every dollar going directly to services. Join us by volunteering or making a donation to support your local community.