Blake Lancette is proof that a person is never too young to make a positive difference in the world. 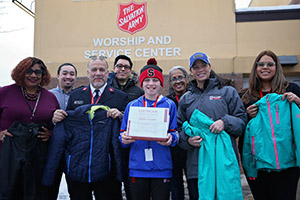 Blake is a 12-year-old boy from Shakopee, Minn. He recently stopped by The Salvation Army in South Minneapolis to make an astounding donation: 350 coats, hats, mittens, and other winter clothing items.

“We were blown away,” said Major Robert Viquez, leader of the South Minneapolis Salvation Army.

Blake collected the clothing items from kids in grades K-8 at two Shakopee area schools. He got the idea to start the drive after his mother’s friend told him The Salvation Army needed help.

“It was amazing how many things we collected,” said Blake, who advertised the drive by giving classroom presentations and through a school newsletter. “My goal was 100 coats, but we ended up getting way more than that.”

Viquez said all of the clothing items disappeared almost as quickly as they were received, taken by dozens of grateful families in the local community.

“This donation came from Blake’s heart,” Viquez said, while handing Blake a certificate of appreciation at the South Minneapolis Salvation Army (pictured). “You and your classmates gave these clothes to help people you don’t even know. We admire you and applaud you for that.”

Blake is proud of his accomplishment.

“The coat drive was amazing,” he said. “I feel really good about helping.”

Now that Blake understands the power of giving, he is eager to help more people in the future.

“I’ve learned that if you have an idea, you should take initiative and never stop trying to succeed,” he said.

Please join The Salvation Army by giving a donation or signing up to volunteer. With your help, we can show families in need that there is #LoveBeyond their most difficult hardships.